We are delighted to present Shooting Stars… Falling Objects by Candie Payne; the first in a series of Artist Spotlight features at the gallery this year.

The collection includes a series of nine works on paper exploring movement. Each individual drawing captures a figure suspended in a point of motion, some are kinetically charged whilst others are serene.

“I’m interested in the idea of figures in motion… surrendering to a state of flux, with no control over where they may land. It’s the nature of life that we often find ourselves in situations, both wonderful and difficult, socially and personally, where we have no license over the outcome, or any way of foreseeing the future however much we try to plan. Equally, we often willingly throw ourselves headfirst into situations, taking risks, giving up, knowingly relinquishing the reins.”
Candie Payne, January 2022

The artist’s original pencil sketches remain visible beneath fluid brush strokes of Chinese ink, evoking a lyrical quality that enhances the sense of movement. The works will be displayed at the gallery as a complete set of nine drawings, and are available to purchase as a set or individually.

“To a large extent it is the perception of the viewer that determines if the figures are falling, flying or leaping; if they are shooting stars or falling objects.”

Born in Liverpool in 1981, Payne moved with her family to New York at the age of four. Regular trips to the city’s world class museums and galleries were a part of everyday life and her mother’s advice to “study the greats” became a mantra. These formative years were vital in shaping her inspiration, and in particular the legendary ballet ‘Swan Lake’ proved to have a profound effect. Such influences are evident within the delicate lines of her pattern work and ethereal figurative studies.

Payne: “I was a naturally creative kid so, growing up in New York, my mum made sure to invest in things that would enrich my imagination and encourage me to pursue those interests. I studied ballet until I was about fifteen so rather than go to the movies or whatever, she would buy tickets so I could see Swan Lake as many times as possible, which I just loved.”

In recent years, Payne‘s practice has evolved to also explore three dimensional objects and interior design. Her drawings and paintings transcend the canvas when applied to fabric, wall coverings and objet d’art, inviting the viewer into a world of dreamscapes and storytelling.

Also featured in Shooting Stars… Falling Objects is ‘All We Have To Do Is Reach Out And Touch It‘ – a four panelled painting inspired by traditional Japanese folding screens.

“I have always been naturally interested in the idea of applied arts, the possibilities when translating imagery on to other materials and objects is endless. The four panel painting was originally inspired by traditional Japanese modesty screens, which can be simple and elegant or extremely ornate. I saw Picasso’s ‘Harlequin And Woman With Necklace’ in Rome a few years ago, and there was something about the mark-making that stayed with me. The palette of Tracey Emin’s lithographs was in my mind too, so a step away from black and white but still as close to monochrome as possible. Apart from the white, I used the same paint pot for the whole painting, adding ink or acrylic or water throughout the process to get a darker pigment or water it down for a wash.”

The exhibition will be open from Saturday 18th December 2021, and will continue showing until Friday 18th February 2022.

Free entry, Monday to Saturday from 10am – 5pm, and also by appointment at any other time.

All We Have To Do Is Reach Out And Touch It

The Age Of A Flower 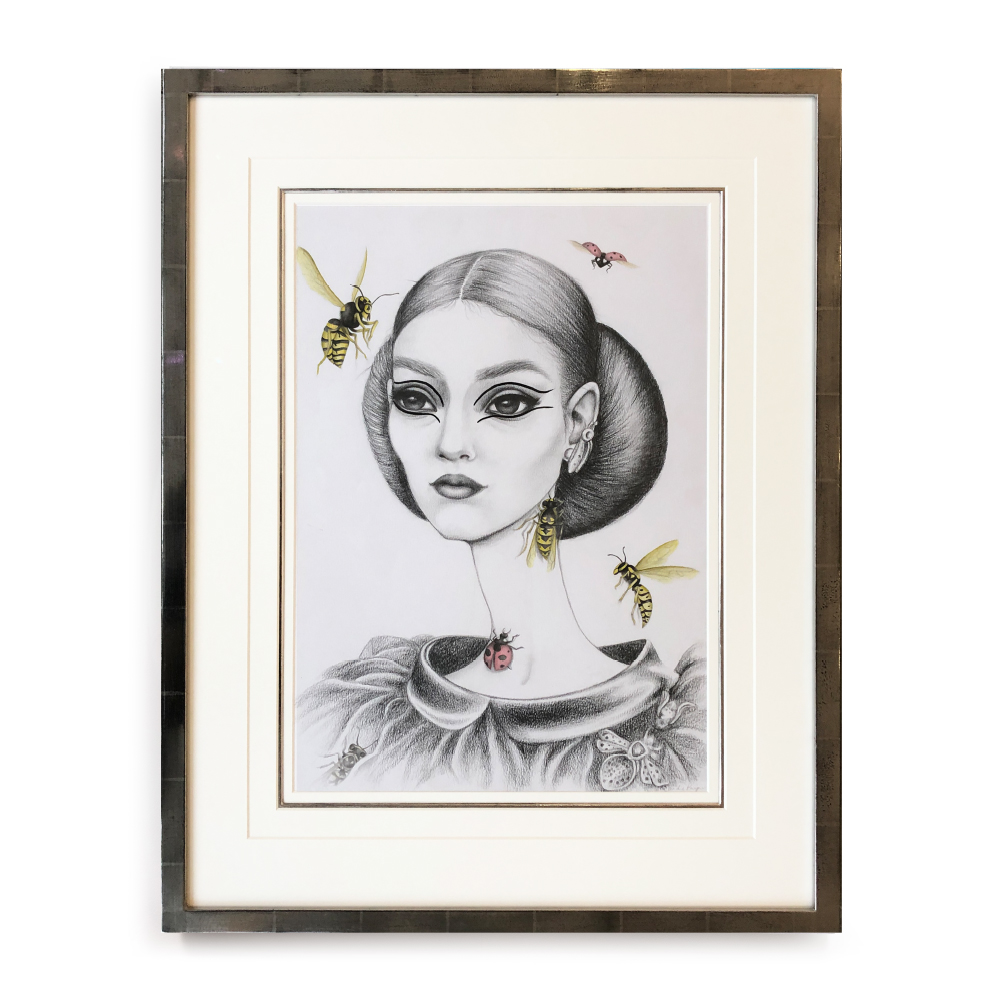